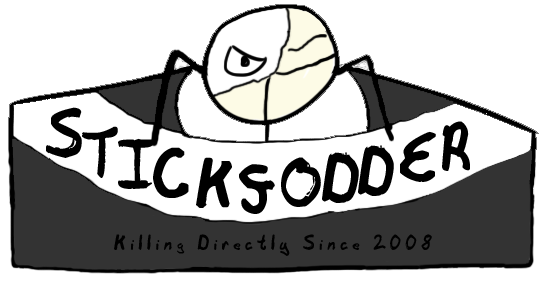 Well I've joined a webcomic creators group. It's called plotholes, it was formed by a bunch of former members of eyeskream. And with this I might be getting a real forum of my very own. *GLEE*

Also I have to thank my friend Nathan (http://www.pibcomic.com/, http://gitcomic.com/) for inviting me to join the group. I'm still not entirely sure what I'll get for being part of the group but I'm excited none the less.

I keep on comic up with more and more little improvements for this site. This improvement isn't as big as buying my domain name but it's still somewhat big. I finally got a favicon set up for my page. What's a favicon you ask? A favicon is the little image that shows up on tabs, link bars, address bars and other places. It's a small improvement but I think it's an important one. And I like it. This is what it'll look like:

And in other news I've decided to keep updating on a 7 day a week schedule, and I'm considering trying updating twice a day so as to catch up with the Drunk Duck site and officially make this my main site.

Does anybody actually read these?

I finally got around to customizing my error page !

I DEMAND THAT YOU LOVE IT!

I spent yesterday with my mom, sister, her boyfriend and his kids. And it was one hell of a day. We started by having an all. you can ear pancake breakfast for about 5 bucks each. Awesome. Then we went to a maple syrup farm thingy place. We went on a wagon ride so the kids could see where the trees that they tap for the maple syrup and how they do it. Neat. There were some animals to pet (rabbits, baby sheep, and a baby cow). Neat. And then there was a demonstration of some of that ax compitition stuff (Underhand chop, Standing block shop, ax throwing, spring board chop(or at least an explanation of it), Single man bucking(they did that one as a race), And Jack and Jill bucking (also done as a race but against chainsaws). All of which were awesome. And the last one (the jack and Jill bucking) they did three times the first time racing against a normal chainsaw (the chainsaw lost) then they raced against a supped up chainsaw with a big ass tail pipe sticking out of it (that chainsaw won), then lastly they raced against a nitro saw (one of these suckers) not only did the nitro saw win from a cold start, it managed to get in two cuts (and it probably could have done more) in the time it took the Jack and Jill team to do one. Awesome. Then we did some walking in a local state park. Came home had spaghetti, overall awesome day.

FUCK! Sorry about this week. At first I had thought that I had filled it up last week. Then I kinda got a head start on St. Patrick's day and the hang over kinda got me distracted. So to make up for my tardieness I'm going to start to update this Sunday and go all next week through Saturday just as my way of apology to those few who do keep on coming back. Ok?

The Great Game of Catchup

I really wan't to get the comic fury page up to date with the main site but I'm still not sure how I want to go about it. Weather I just want to do a full week schedule or if I want to do multiple updates a day five day's a week. Or maybe combine the two. Either way I've got to start doing more updates. *SIGH* I still need to finish getting my main folder in order, and I'm only up to comic 100. Even then I need to make a record of all my author notes.

When typing on the computer I often misspell many words. And it's annoying. But I just either erase and re-do the word or right click it and find the right spelling. But when I misspell the word "it" I write it as "ti" and when I do this I have a very strong urge to just continue with it and add another "t" making it a "tit". And this only seems to happen when I just really can't do it and it's getting kinda annoying. TIT.